You can now escape from the concrete jungle and start enjoying rainforest, beaches, and nature in less than 11 hours. British Airways is introducing direct flights to Costa Rica from London Gatwick starting in May this year. The news comes as an amazing opportunity to boost economy and tourism in the tropical paradise. 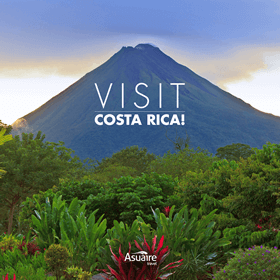 The move was not a total surprise for Mauricio Ventura, Costa Rica’s Minister of Tourism, as flights from the UK have increased by more than 12,000 in the last 3 years, and 12.9% alone in 2015, based on statistical information from the ICT (the Costa Rican Institute of Tourism).

To us at Asuaire, those numbers aren’t unbelievable either. Costa Rica is often considered an oasis for explorers, bird watchers, nature lovers, relaxation seekers, and pretty much anyone who wants an amazing holiday. So what are you waiting for? Your new nonstop flight options will have you in a whole new world in less than half a day.

The flights will depart from Gatwick and arrive in San José, the capital of the country, running twice weekly during the summer and three times through the winter. This addition will provide you with more chances to witness the diverse wildlife that lives in the tropical country at your convenience.

Direct flights to Costa Rica will cross the Atlantic Ocean, where you will land among tropical beaches, volcanic peaks, and lush forest. 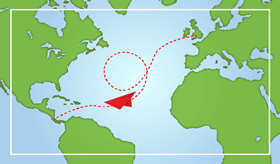 Thrill seekers from the UK will be able to take part in rainforest hikes, rafting in white water rapids, or surfing. Animal lovers will be spoilt for choice with everything from sloths to caiman and capuchins. Relaxation enthusiasts should picture themselves relaxing in an oceanfront hammock between palm trees. If this is some of the best news you’ve heard today, contact us for more information. At Asuaire, we’ll design the best travel experience you have ever had!