4 US $ 1,000
Travel package
9 days&nbspand 8 nights
* Price based on two adults traveling together during low season. * Package subject to availability at the time of reservation. * Special prices for children and groups available upon request. – Package valid for the year 2018 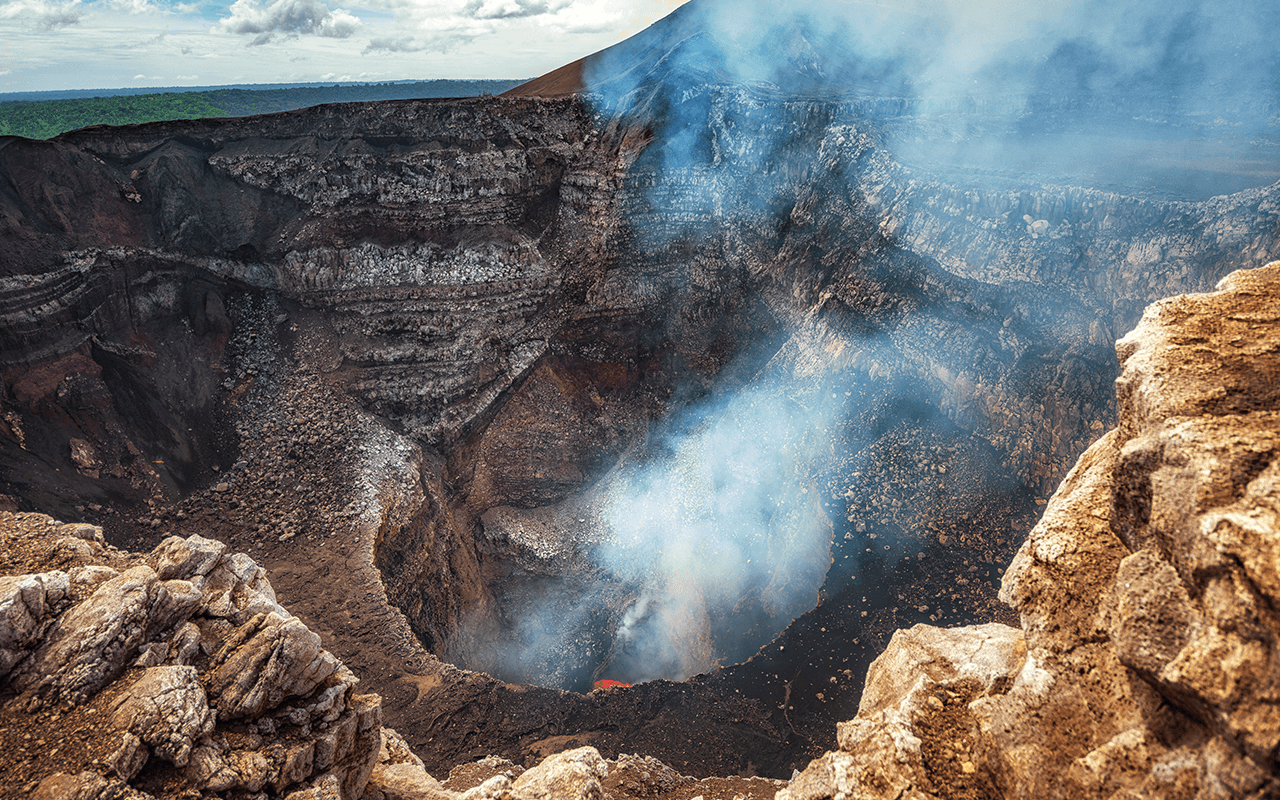 Private transfer from the airport to the hotel where you will be staying. Meeting with the guide and welcome dinner.

This morning after breakfast we meet with our team and we will have a brief talk about the challenge to be carried out in the coming days. We move on to the city of León — the registration process is performed and then we move to the Cerro Negro Volcano Nature Reserve and start the challenge at one of the youngest and most active volcanoes on earth. Cerro Negro was formed more than 160 years ago and has erupted 18 times since then. There are no trees or plants on its steep, rocky slopes, so we have the advantage of panoramic views of the Pacific Ocean from the top of the volcano. This is a sunny day, probably like a typical day in León; you return to León before sunset.

On this third day we meet our team after breakfast and we travel for 50 minutes in a 4×4 vehicle to the slopes of the Telica volcano. This walk is linear, which means that the team goes up and down using the same path (3 km in each direction). Telica is one of the most active and unexplored volcanoes in Nicaragua. The volcanic activity here is particularly evident throughout the year and there are traces of mud and volcanic clay.  The most impressive thing is that since its last explosion in 2004 it is still smoking. The trek in the Telica volcano is quite easy and has excellent views. Just seeing the walls of the crater that rises from far distances is impressive. Here you will have the opportunity to see an active crater and take the best photographs of the volcano itself. This walk lasts 4.5 hours in total ascending and descending, so the team can be back in León for lunch. In the afternoon the team will tour the city of León visiting the most important sites, as you’ll be walking through the streets in the historic center.

Today we prepare to hike to El Hoyo volcano, our third active volcano that is partly covered by tropical forest lands and pastures. The adventure begins when the leader of the local expedition picks you up at your hotel and takes you on a 50-minute drive on a dirt road for to the guard station located at the bottom of the volcanic complex Las Pilas – El Hoyo approximately 300 meters above sea ​​level. After registering in a visitors book you must start the ascent by a natural path in its most difficult part. During the ascent and descent we follow the same path that will give you the pleasure of enjoying excellent views of a unique volcanic landscape that stimulate the adventure from beginning to end. El Hoyo Volcano is easily recognized by a huge hole in its slope, it has two permanent smoking craters that show its past and present activity. Due to its long slopes and truncated cone El Hoyo is considered a kind of Hawaiian volcano. Its last eruption took place in 1954 and caused a great amount of damages in the surrounding areas. Today’s walk lasts approx. 6.5 hours with the necessary equipment.  It is important that you know that you will carry your own lunch.

For this walk we start again from the city of León, first the group will be transferred from León to the small town of Potosí (2 hours driving a distance of 120 km), where the tour begins and ends.  This trip will take you along the Maribios mountain range passing through several villages and extensive areas of traditional crops.

The last violent eruption took place in 1835. It has been considered the most powerful explosion in the recent history of Nicaragua. A large part of its crater lost huge pieces of rock, forming islands in the Gulf of Fonseca. In 1938, a lake was developed inside the crater in the hole that appeared after the eruption (which is not easily visible from below). Nowadays, its slopes are mostly covered with trees and extend almost to the Gulf of Fonseca. The volcano consequently, does not appear to be a volcano, judging from its shape. It merely seems to be a hill that’s been stretched to be longer. However, the crater and its lake are really impressive and can be seen from the top, where you will not only have a super view of the three countries of Central America, including Nicaragua, but also the Gulf of Fonseca, Padre Ramos Reserve, the Pacific Ocean and much more.

Momotombo is considered the most impressive and representative volcano in Nicaragua, it is considered a difficult hike, since it rises to 1,297 meters and has a fairly steep slope all the way up. Momotombo has been active since before the Spaniards arrived in Nicaragua. This high peak exposes the cone-shaped mountain to all the characteristics of a “traditional” volcano. This giant can be easily seen from afar, helping some travelers get their bearings. Gas is constantly being emitted here and from time to time a strong earthquake is felt throughout the Momotombo. The first Spanish settlement in Nicaragua was founded a couple of miles away, as well as a geothermal plant that was created at the foot of it. For this adventure the team will drive up to 450 meters in a 4×4 vehicle, then continue on foot on a fairly empty flat surface. It takes approximately 4 hours to get to the summit and only 2 hours to get back down.

In the morning after breakfast at your hotel at 9.00, you will be driven to the Masaya volcano. Declared the first National Park in Nicaragua in 1979, the Masaya Volcano National Park has an area of ​​54 km² including two volcanoes and five craters. With a biological and geological museum and more than twenty kilometers of trails, this is the most visited and accessible volcano in Nicaragua. It is the only volcano in the Western hemisphere where tourists can approach the banks of the steaming crater and observe its recently formed lava lake, if you are lucky you will see the extremely rare green parakeets (chocoyos) that, curiously, live in the slopes of the volcano.

After breakfast, the adventure continues with a walk through the cloud forest of the Mombacho volcano. This is another of the most important nature reserves in Nicaragua and is only 20 minutes by car from the city of Granada. The Mombacho has a strange forest often covered by mist where several native plants bloom and animal species reside. The incredible slope guarantees a spectacular walk from the slopes of the volcano to the biological station at 1,350 meters. Once at the top you can cross the crater path, one of the three educational trails open to the public, the team can walk approx. 1.5 hours while enjoying a pleasant atmosphere and good views of the city of Granada, Lake Nicaragua, the Asese Peninsula and more.

In the afternoon we will relax with a boat ride and visit the small islands in Lake Nicaragua. All these islands were formed by the eruption of the Mombacho volcano a few thousand years ago and that today are home to a great diversity of waterfowl species.

Tonight we will enjoy a celebratory meal to mark the end of an incredible challenge.

Individual private transfer to the airport to get your flight home.

This tour is only convenient if you are used to longer rides and are in good physical shape in general. Normally, climbs take 4-5 hours, but it is not a problem if more than that is required, as long as you feel comfortable with the rhythm.

You will only have to carry a light backpack with some water and clothes, and maybe your camera during the climbs to all the volcanoes.

* Price based on two adults traveling together during low season. * Package subject to availability at the time of reservation. * Special prices for children and groups available upon request. – Package valid for the year 2018

All transport in vehicles, minibus or private 4x4 according to itinerary. Private transportation service.

Boat tour through the islets of Granada.

Meals as specified on the itinerary.

Excursions and activities not specified on the itinerary.

Meals and services not specified on the itinerary.

Airport taxes on the day of departure. We are a sustainable travel agency